Learning the Language of Dolphins

When most people think of dolphins and language, all that comes to mind is the passage in The Hitchhikers Guide to the Galaxy where it is proclaimed:

“On the planet Earth, man had always assumed that he was more intelligent than dolphins because he had achieved so much – the wheel, New York, wars and so on – whilst all the dolphins had ever done was muck about in the water having a good time. But conversely, the dolphins had always believed that they were far more intelligent than man – for precisely the same reasons. The last ever dolphin message was misinterpreted as a surprisingly sophisticated attempt to do a double-backwards-somersault through a hoop whilst whistling the ‘Star Spangled Banner’, but in fact the message was this: So long and thanks for all the fish.”

Studies show this might not be so far off. The part about dolphins communicating with whistles, not the bit about dolphins thinking they’re better than us. I’m sure they’re probably very humble. 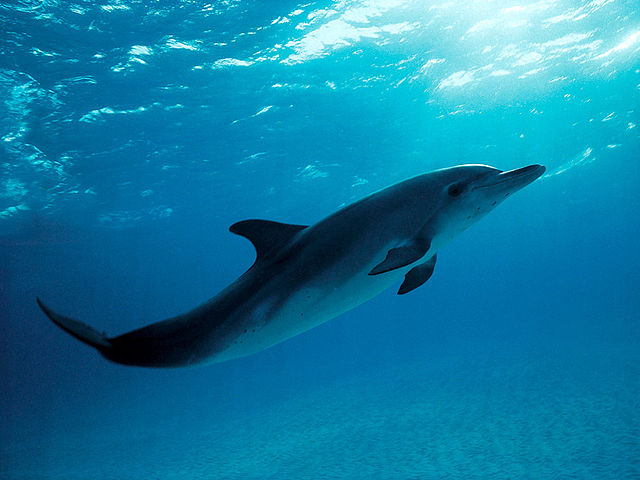 Starting from birth, dolphins can squawk, whistle, click, and squeak. And it seems, with every new study, that there may be more to it than what we understand. Scientists believe dolphins have signature whistles that are tantamount to names.“Our results present the first case of naming in mammals, providing a clear parallel between dolphin and human communication,” said Stephanie King, a marine biologist at the University of St Andrews.

It is also believed that dolphins can have conversations. In an aquarium in Hawaii, a mother and her two-year-old calf were put in separate tanks connected by a special underwater audio link. The two dolphins began squawking and chirping to each other. “It seemed clear that they knew who they were talking with,” says Don White, who ran the experiment. “Information was passing back and forth pretty quickly.” But what were they saying?

Another scientist, Denise Herzing, who has spent the last 28 years of her life living with a pod of dolphins in the Bahamas speculates that “they say things like ‘there are some good fish over here,’ or ‘watch out for that shark because he’s hunting.” Herzing and her team even went as far as to create an interface for two-way communication between themselves and the dolphins. So far they have yet to crack the dolphins’ linguistic code, but that doesn’t stop them from trying.

In the (very) distant future we may be able to take language classes in order to converse with animals. What language class would you take?

Comments on Learning the Language of Dolphins