How we create speech is a very complicated process. First, the desire to express an idea vocally needs to exist. Next, our mind sifts through different words trying to find the most relevant ones to properly convey our meaning. Then comes grammar, the words need to be in the right order to be understood. Lastly, by means of inflection and body language, the intention of the statement we’ve just created is reinforced as it exits the mouth and makes its way into the harsh light of day. That’s a lot of processing happening in a very short period of time, which is why I don’t think I should be blamed for accidentally telling a friend she looked “frumpy”. It wasn’t my fault, I swear! I meant to say she looked “funky”, but there seems to be a glitch in my mental programming that allows this to happen. Often. My attempts to verbally hit the backspace button didn’t help matters at all.

Looking back, that might have been a good time to put that whole “if you can’t say anything nice don’t say anything at all” advice to good use. This story is a good example of a Freudian slip; when we mean to say something benign but instead divulge what is really on our minds. Though, if I’m being honest, she did look nice, but her eclectic style doesn’t really suit my tastes—not that you care, I just want to clarify that I’m not a terrible person. Really, I’m not. I think my problem lies more in the realm of word choice.

Words define reality. Our brains automatically pick words to give our ideas shape, and when our minds are otherwise engaged, word choice can sometimes be affected. “Funky” isn’t a terrible thing to be called, but my mind may have (traitorously) chosen that word because it isn’t necessarily a glowing compliment either. With that in mind, the tone of the conversation was set and without any preamble my internal editor skipped ahead to the next most relevant word.

Word choice is really important, and not just when sliding down a Freudian slippery slope. As a writer, my voice, or style, is wholly dependent on finding the right balance between choosing the right words to express my point, and then arranging them in a way that gets my point across to you, the reader. Similarly, as a language learner, correct word choice is of vital importance. 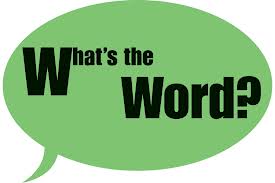 People don’t realize that they carry with them a weapons-grade vocabulary; one misspoken word can mushroom into a mortifying situation. Take, for example, the Spanish phrase “Por favor, puede mover su pata.” This comment can be said to a friend without detonating a drama-bomb, but if said to someone in a formal setting, prepare to be embarrassed. Why? The word “pata” and “pie” both mean foot, but the word “pata” is used to refer to animals. Congratulations, you have just politely asked someone to move while insinuating that they are a lowly creature.False friends, words in different languages that sound and are spelled similarly but have different meanings, can also pose problems. Imagine you find yourself speaking German, unsuccessfully trying to explain you will meet up later because you need to do something right then. You try to use hand signals, but they aren’t really getting your point across. Then you have a great idea, you vaguely remember hearing a word that must have the same meaning in German as it does in English. So, while continuing your gesticulations, you say “after, after.” All you get in return is a deeply confused look, and possibly some chuckles. While spelled and pronounced almost the same, “after” in German does not mean later, it means rectum. 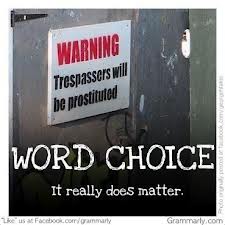 So how can those acquiring new languages spare themselves from this kind of gaffe? Get to know that list of false friends you’ve been avoiding, and practice reading and listening in your second (or third, or fourth) language as often as you can. The more words you know, the more you have to choose from. How can you avoid making Freudian slips? I’ll let you know when I figure it out.

Have you ever had a problem picking the proper word? Take your time wording your response then let me know, just be careful of your use of the word “after”.

Comments on Choose Your Words Wisely