5 Untranslatable Idioms From Around the World

All idioms worldwide have historic legacies that have been lost over time, rather than in translation. “Showing your true colors” originated from the early days of seafaring, as most ships displayed their nation’s colors to identify themselves. Being “sick as a dog” came about in the 1700s, when dogs were not as healthy, well-groomed, nor had access to the plethora of health and beauty aids as they do today. “Sticking to your guns” was a military command given to sailors and soldiers alike, in order to ensure that they held their ground and their weapons at all costs.

Unfortunately, some very beautiful foreign idioms are easily culturally lost in translation. One thing that they all have in common, though, is everyday things such as cats and dogs, livestock, and even some popular worldwide vegetables; all easily and universally relatable, and commonly included in countless idioms worldwide. Listed below are five well-known idioms from around the world. They may sound like gibberish when translated literally, but they can be easily understood in the common translations. 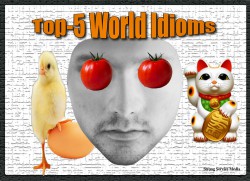 Idiom: Tomaten auf den Augen haben.
Literal translation: “You have tomatoes on your eyes.”
Common translation: “You are not seeing the same thing that everyone else is seeing” – It’s like calling someone oblivious to their surroundings.

The saying above is a good example of the use of a popular vegetable in an idiom, which entered Germany in the early 1600s, and was only grown ornamentally until the 1700s, due to it mistakenly being considered poisonous before. It then grew in German society’s minds as a means to convey a person’s socially perceived blindness to their own surroundings.

More specifically, this expression refers to a person who constantly changes the topic of a conversation, and/or repeatedly changes one’s mind without any coherent rhyme or reason. This is a great example of common livestock being used in order to convey a feeling of perplexity over another person’s seemingly irrationalidiosyncrasies.

Idiom: На воре и шапка горит
Literal translation: “The thief has a burning hat.”
Common translation: “He has an uneasy conscience that betrays itself.”

Otherwise known as, “The person has a very apparent guilty conscious.” Obviously, if something is really “burning in your mind,” it commonly means that some sort of monumental conflict is going on inside your head. The idiom above takes this a dramatic step further.

This idiom, however innocently, involves an unpleasant medium in order to convey its deeper meaning. Essentially, one should not talk down to someone of an elevated social standing in Korea. This saying is deeply rooted in the important social hierarchy, which is prevalent throughout many Asian cultures.

Japan’s common belief of good luck and the promise of wealth being represented in the symbol of a cat’s paws, would seem to insinuate that the borrower in this idiom is utterly out of luck, and desperately needs help quick in order to prosper.

Although you won’t be speaking in idioms when they travel abroad, keeping them up your sleeve is a great step in the right direction to learn the language and cultural history. The professionals at the Listen & Learn language centers can set you on the course to being fluent in the language of your choice, be it professional, or recreational, and teach you a few fun foreign idioms along the way as well. Contact Us in order to get started on your new language adventure, today.

Comments on 5 Untranslatable Idioms From Around the World