Located in South America, Venezuela covers 882,050 square kilometres of mainland and it borders Guyana to the east, Brazil towards the south and Colombia to the west. It is Caribbean neighbours with Trinidad and Tobago, Barbados, Curaçao, Bonaire, Aruba, Saint Vincent, the  Grenadines, and the Leeward Antille. Overall it’s the 33rd largest nation in the world. 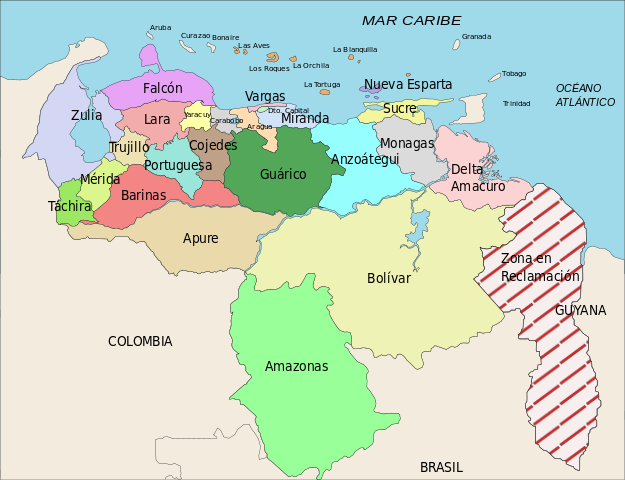 Originally Venezuela was first colonised by the Spanish in 1522, with many indigenous peoples such as the Mariches, Teques and others suffering greatly, despite many of their thwarted uprisings.  Simón Bolívar known as the Liberator, helped to win the Battle of Carabobo on 24th June 1821, thereby helping Venezuela to regain its own sovereignty. Venezuela subsequently became independent from Spain in 1830. Once famed for its petroleum exports and passion for baseball, lamentably it is now deeply marred by political wranglings, economic instability, mass hunger and criminality.  In context the IMF has predicted that inflation could reach a record 720% this year, with many people queueing long hours daily  for basic necessities. Alas the list could go on and one can only wish its people well. However one of the defining features of what unites Venezuela  is how the language is spoken and how distinct it is compared with much of South America.

Now onto the Linguistics of It All

In terms of language, due to its previous Spanish colonisation, the official and most widely-spoken language is Spanish. But, if you’ve even so much as tried to communicate with a Venezuelan, you’ve probably already realised that the dialect is quite unique, and that’s exactly what we’re hear to discuss.

First and foremost, let’s start with the basics. It’s customary for many words to be phonetically truncated, or words that become verbally shortened.  Once Venezuelans become enthused on a particular topic then their speech can gain momentum rapidly, with the words once again becoming compressed to allow for a melodic tone.  ‘Se comen las palabras’, is what they’ll often tell you in relation to this social phenomenon. Quite literally’ the words are eaten’, or to any Anglo-speaker, the letters are dropped.

The most pertinent example of this is for the term ‘para’ (for/ in order to) being dropped to ‘pa’, which is a frequent occurrence. Similarly it is also highly frequent to hear several vowels being dropped during common speech. The most common case would be the S and D. Instead of ordering an Ice cream by saying ‘helado’ in Venezuela, it’s far more common to say ‘helao’.  Or when it comes to the S, The term for many in Spanish is ‘muchos’. Nevertheless this is not aspirated, rather it sounds much softer, akin to the sound H to ‘much-ohh’. This particular aspect though does fall in line with several other dialects around the Caribbean and South America and coincidentally tends to happen whenever there is a beach.

Another example of what distinguishes Venezuelan Spanish would be the use of the diminutive, which is extremely common. In short it means ‘little, smaller or tiny’ in a particular sentence. Many words will have ‘ito/ita’ added at the end of their word. This is a way of being more affectionate, spontaneous and playful with the language, in addition to as making it somewhat more colloquial. For example ‘ahora’, the term for ‘now’ in Spanish, is commonly referred to ’ahorita’. Occasionally you can even see it on the ends of verbs like ‘acabar’, as in ‘acabadito de llegar’ implying that someone has just barely arrived. Overall this allows for a more idiomatic style of speech, carrying more sentiment by joyfully enjoying the language.

Moreover, the use of ‘you’, which is either ‘tú’, ‘vos’ or ‘usted’ in Spanish, is something which changes in each area. The most prevalent place to hear is the use of ‘vos’ instead of ‘tú’ in informal parlance is in Zulia. Take into consideration that this construction compared with Rioplatense (Argentina and Uruguay) varies significantly.  In place of tú eres, tú estás, those from Zulian say vos sois, vos estáis, compared with plural forms in Iberian Spanish such as vosotros sois, vosotros estáis; and with Rioplatense forms which are vos sos, vos estás etc. In addition towards the frontier with Colombia in such areas as Mérida, Táchira and Trujillo both usted and tú are used in an interchangeable manner, regardless of whether it is a formal situation or not. It’s simply customary. Ustedes is also the correct plural address for you, throughout the whole of Venezuela and Latin America.

But Venezuelans Still Don’t All Sound the Same

There are also significant considerations to bear in mind around accents in the country. The Margaritan dialect (oriental), originating in Isla Margarita and the northeast of mainland Venezuela, sees a strong use of ‘r’ instead of ‘l’ in most words. For example instead of ‘el mar’, meaning the sea, it would be pronounced locally as ‘er mar’.Overall the Caracas dialect,  which is spoken in the capital, is used by the media and is taken to be the standard bearer of Spanish in Venezuela, with its variants generally related to the social classes there. This is whether you’re a farándulero/a (nouveau riche) category or simply are a ‘barriotero/a’(somebody from the working class neighbourhood).

Once again in comparison with Latin America, there is also no phonetic sound difference around the ‘seseo’. In brief this means there is no phonetic change between ‘caza’ (hunt) and also ‘casa’ (home), i.e. the S and Z sound the same. They cannot be distinguished unlike in Iberian Spanish, where the social development exists to allow the auditor to distinguish between the S and Z in a clear manner.

Let’s Bring It All into Focus

Overall Venezuela is a diverse and multifaceted country,  possessing differing ethnicities, each with their own customs and traditions which is very much reflected in the language. Moreover the country’s placement and orientation towards the Caribbean has meant that the language has evolved distinctly to much of the Spanish in South America. Spanish in Venezuela is far more similar to that of  Central America and Caribbean Spanish. Historically Iberian Spanish has helped mold Venezuelan Spanish, in addition to Spanish from the Canary Isles, which in turn was also influenced by African Languages. Furthermore it is not so uncommon to find how Spanish in Venezuela has been altered by other languages such as Italian, French and English too. Ultimately Venezuelans are very warm, endearing and will be will very happy to ingratiate you into their social circles. In order to forge closer relations it is probably best to be armed with some Spanish knowledge beforehand, therefore here are few terms to add to your lexicon!