What Our Emoji Use Says About Us

In the last several years, emoji have become a pervasive part of our technology-driven culture. More and more, people are using these images as replacements for written language – so much so that emoji have become a language in their own right. You’re probably guilty of using them yourself. Often emoticons serve as a great way to express emotions that don’t always come across in words. In fact, your favourite emoji that you love inserting into each and every text conversation can say an awful lot about you, as can how often you use them. 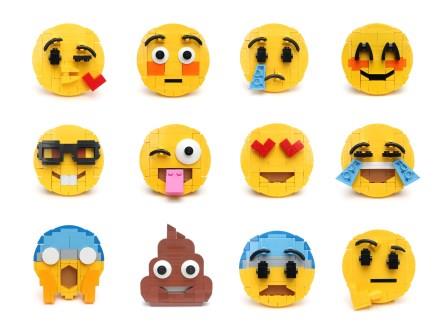 Emoji may be considered a universally understood language, but the most utilised icons vary greatly around the world depending on the culture and country the user hails from. Studies have shown that the poop emoji is most used in Canada, while the Tears of Joy emoji is popular in the UK. In almost stereotypical fashion, the heart emoji is France’s top-tweeted image, while Arabic-speaking countries have a strange affinity for plant icons.

However, the one thing all these nations have in common is the preference for faces when choosing an emoji. The fact that we love using images that can, to some extent, replicate our own expressions says a lot about us as human beings. Furthermore, data has shown that about 70% of our emoji usage relates to an emotional experience of some kind. Our parents grew up in a time where showing a lot of emotion was not considered permissible; it’s remarkable our modern generations not only feel greater emotional freedom, but also that they have such creative and wide-ranging tools of expression at their disposal – even if it’s a tiny little cartoon broken heart. 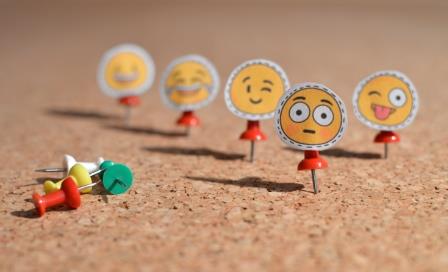 While emoji is supposed to be straight-forward enough that anyone, whether you hail from China or Brazil, can understand them, as with any language there are things that get lost in translation. I remember once using a grinning face emoji in a group chat which I interpreted as a sign of agreement, until a friend mentioned later that he thought it meant I was embarrassed about something. In the same vein, Praying Hands emoji would be interpreted differently in India where it could indicate the standard ‘Namaste’ form of greeting, while in other countries people might interpret it as clapping hands, or that you are bowing to someone’s brilliance.

There are many cases like this where emoji are taken and their interpretation tweaked according to country, culture, and, in some circumstances, even just plain old human standards. For example, remember the emoji with smoke blowing out of its nostrils? Creators originally meant for this emoji to indicate a triumphant face; however, you’d be hard pressed to find anyone who actually uses it that way. People, regardless of where they live on the globe, tend to see an angry face instead of a triumphant one. The list goes on and on. The Dizzy Face is used to show surprise, while the famous dancing Bunny Girls, a symbol of sex appeal in Japan, are used elsewhere to indicate excitement. You may not realise it, but your culture deeply affects how you use emoji! 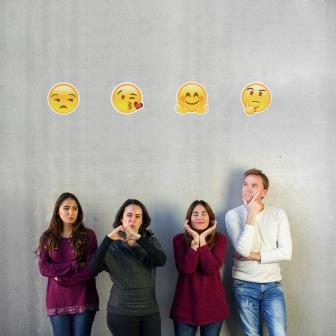 Because emoji language is still a relatively new phenomenon, there haven’t yet been any in-depth psychological studies into what emoji use says about each individual’s personality. Some experts are still willing to hazard a few guesses when it comes to interpreting emoji usage. The frequent appearance of sporty emoji in someone’s messages may indicate that they are active, or wish they were. When someone puts hand emoticons to use more than they do, say, faces, it could be a sign that they are more sensible by nature. Perhaps though it is best not to read too deeply into it until more studies have been done.  After all, it’s hard to believe that someone who uses a lot of food emoji is a big eater or baker, or that the love of the skull emoji means you are obsessed with death! One man’s death emoji could be another man’s solemn emoji. It’s all in the interpretation.

What are some of the emoji you use the most? What do you think they say about you? Can you draw parallels between your favourite emoji and your personality?

Comments on What Our Emoji Use Says About Us