Berlin has a long been a home to migrants and a seat of international influence since its humble beginnings as a settlement on the Spree River in the 12th Century. Since the Second World War Berlin has hosted large populations of Turkish, Polish, Vietnamese and now, more recently, Syrian migrants. While the official language is still naturally German, one can hear a plethora of languages spoken by the city’s inhabitants. This multicultural history has taken a few knocks in recent history however, which shows in Berlin’s demography. As of summer 2017, 18.7% of Berlin’s inhabitants were foreign-born, whereas figures for 2011 showed Paris at 20% and London at 37%.

In 2015, Chancellor Angela Merkel decided to accept hundreds of thousands of refugees into Germany, mainly those fleeing the brutal and interminable Syrian Civil War. Anyone who migrates to a new country will face many challenges along the way, as can the community who eventually houses them. The scale, speed and humanitarian needs of these refugees, however, have posed some more unique hurdles to overcome, namely: How will Berlin help refugees integrate successfully into their new communities?

Getting a job and a place to stay in Berlin is difficult without a fair understanding of the German language, although native English and a degree can at least open a few doors for you. The majority of those seeking refuge in Berlin come from Syria, Iraq and Afghanistan, and so speak Arabic and Farsi primarily. Assuming they have submitted their application for asylum and been assigned a bed in temporary accommodation, priority number one for most refugees will be learning German.

‘Integration Courses’ are offered, which aim to equip new arrivals with a basic understanding of the German language, culture and law after around 600 hours of classroom time. Prior to 2015, refugees were barred from enrolling in these courses yet now they are compulsory for successful applicants. So, problem solved? Unfortunately it’s not so straightforward. Here are a few reasons why:

Supply did/does not meet demand. Since 2015 Germany has taken around one million asylum seekers (although not all have been accepted or allowed to remain). For obvious reasons, there weren’t one million free spaces on language courses at the time. Germany has been quick to respond, however, with places available rising from around 280,000 in 2015 to 530,000 in 2016.

Already difficult to navigate, this unavoidable aspect of German life is even slower and more complicated for refugees. Most refugees need help even applying for the course, and waiting times for free spaces can be weeks or even months in some cases. And that is all only after their application to stay in Germany has progressed far enough to even be given permission to apply for the Integration Course in the first place. A frustrating catch 22 for many who lack the skills needed to get help acquiring those same skills.

Berlin is facing a rather strange housing crisis. At first (and second) glance, the city seems half empty, with vacant lots and boarded up buildings all over the place. The prospect of cheap rent is partly what drew so many migrants from all over the world. However, rent is skyrocketing in a city which feels quiet compared to other major European capitals. A forest of cranes litters the city, all working to build more homes to meet this influx of migrants.

So where do refugees figure in the pecking order of applicants for housing? Very low indeed. Despite being a temporary camp, around 1,000 people still remain in Tempelhof Airfield’s hangars, packed into shared, open cubicles. Few facilities are available within the hangars and the 6-week maximum stay has turned in to 6 months for some. For those struggling to maintain or attain a roof over their head, let alone a sense of safety and privacy, the long-term goal of linguistic independence and social integration often has to be put on the back-burner. 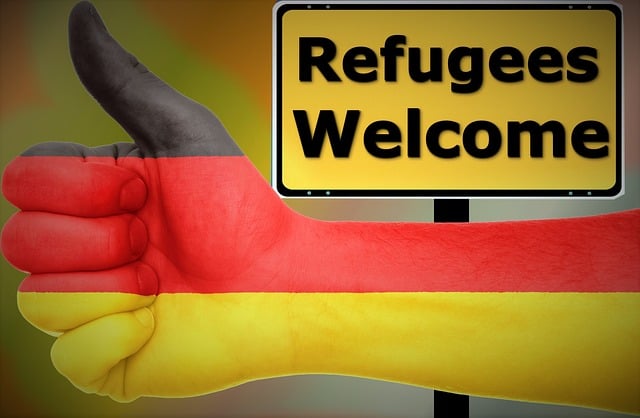 It can be easy to overlook this crucial issue: school is hard! Long days studying opaque German grammar take their toll on most people, regardless of the intensity of their need or motivation. If you ask your average English-speaking migrant in Berlin how they feel about the language, you are likely to receive an exasperated response. Approaching that same language without shared linguistic roots, vocabulary and alphabet seems like a very daunting task indeed.

With so much to overcome, learning the language and integrating socially are made so much harder in a country not yet famous for its warm and open culture. So is linguistic integration an unachievable goal for Berlin’s refugee population? Far from it, with a multitude of volunteer-led initiatives helping fill in the gaps left by the government’s hasty humanitarian gesture, as well as groups and events led by refugees themselves.

The sharing of cultures, skills and ideas is helping people make friends and build a social network for themselves. This also provides authentic practice for those learning German, something sorely lacking for those who spend most of their time either in class, in a waiting room or in an aircraft hangar. Practical concerns aside, welcoming invited guests properly is a good way to start any party, especially if their journey was a nightmare.

Comments on Refugees, Migration and Language in Multicultural Berlin