Thinking about learning Catalan? We totally get it.

Catalan is a very intriguing, idiosyncratic language. With its perfect blend of Spanish, French, Italian and Portuguese, it might seem familiar at first. But it’s much more than just a fusion of other languages.

Spoken by around 7 million people, Catalan has its heart in the streets of Barcelona, where it flows alongside Castilian Spanish in a complex sociocultural interplay. 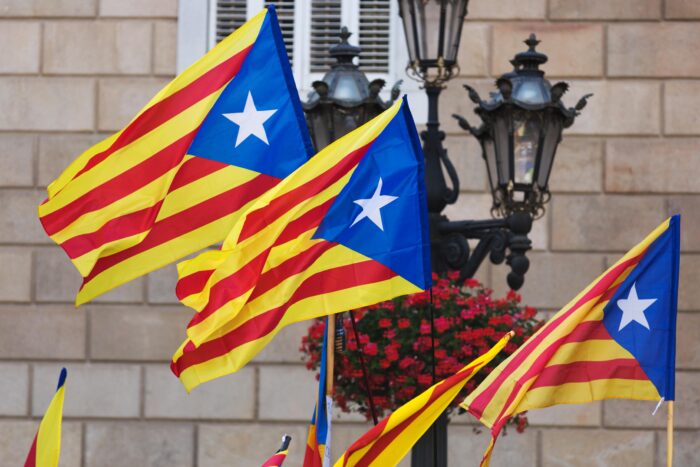 But it is also the only official language of Andorra, a region known for its paradisiac mountain lakes. There, Catalan is not just a language. It’s a symbol of identity, sovereignty and freedom.

And one thing more, it’s also almost identical to valenciano (a language spoken by millions of people in the Valencia region) so you will be able to travel seamlessly between Catalonia and Valencia while impressing the locals with your knowledge of their language.

So, whether you’re learning Catalan because you’re an art geek, a traveller, or because you want to help preserve the cultural value embedded in a minority language, there is one thing you can do today to start familiarising yourself with the sounds of Catalan.

That’s right. Nowadays, Catalan films and TV series can easily be found on platforms such as Netflix and Amazon Prime and, unsurprisingly, they happen to be excellent entertainment.

Below, you will find a list of Catalan films and shows you have to see if you want to learn the language.

Ficció is the story of an introverted middle-aged filmmaker named Alex, who decides to move to a quiet village to finish his latest script amid the hills and peacefulness of the countryside.

While walking around the village looking for inspiration, he meets a violinist named Mónica, who’s spending a few weeks in a friend’s house. They talk for several hours every day until they eventually realise they’re in love with each other. However, there are a few obstacles that they will have to overcome if they want to be together.

If you’re looking for realistic Catalan films about midlife crises, you can’t do much better than Ficció. Beautifully acted and intelligently written, Ficció is one of those films where body language and silent glances communicate as much as words.

The film explores the transition from the rationality of the 18th century, an age marked by reason, enlightenment and sensuality, to the romanticism of XIX, a time of violence and obscurantism.

To personify these two opposing worlds, the director uses the figures of Casanova and Dracula. The Italian adventurer lives a life of decadence, sexual liberty, and pure enjoyment in a small countryside village surrounded by nature.

However, when the Count arrives, the atmosphere of this joyful place becomes dark and oppressive, leading to a breathtaking, mysterious ending that (as is common with Catalan films) will leave you thinking long after you’ve turned off your screen.

Anita sees her lifelong dedication to her job in a cinema box office literally gone to waste when the building is demolished by an international company that intends to replace it with a fancy multiplex.

Unable to accept her new reality, Anita goes to the empty lot every morning and watches the builders work. One day, she starts talking to one of the workers and they start a bittersweet, moving friendship that develops into a tender romance.

Like many Catalan films, Anita no perd el tren is a realistic, almost naturalistic film with lots of things to say about our changing societies, and a powerful message about finding hope in the most unlikely places.

Manuel and Andreu were only 10 years old when the Spanish Civil War reached Mallorca.

From a very early age, they were forced to experience the cruelty of war as people they knew got shot in the middle of the main street.

Ten years later, both suffering from tuberculosis, Manuel and Andreu meet again in the hospital of Caubet, Mallorca, and they are able to resume their friendship. Manuel, who is shy and fragile, soon starts to feel attraction for his surly, strong friend. However, being very religious, he will have to face not only his friend’s rejection but also his own guilt.

Based on a novel by the late Catalan writer Blai Bonet, this is one of the most poetic Catalan films from the early 2000’s and it marked an impressive debut for both Roger Casamajor and Bruno Bergonzini, who played the main characters with great sensitivity and naturalism.

Catalan films are great, and Catalan series are not far behind.

Merlí is a gripping, highly educational show about a high school philosophy teacher and the lives of the students in his class. Both loved and hated by his peers, Merlí has a very unique (sometimes controversial) approach to teaching philosophy. He doesn’t hesitate to have honest, peer-to-peer conversations about love, family and sexuality with his students, which gets him into trouble more than once.

This is a fantastic show about how great teachers can change lives, but it’s also an educational viewing experience, as every episode revolves around the ideas and teachings of a great thinker.

You can stream the three seasons on Netflix, but make sure you do it in Catalan! That way, you will get lots of exposure to realistic, everyday language.

Do you want to take things to the next level and do some serious learning?

Then the best thing you can do is take a lesson with a native Catalan teacher. Get in touch with us now and we’ll pair you up with a fully qualified Catalan tutor! With our personalised, one-to-one courses, you will be able to speak much faster than you would with traditional courses. Reach out to us now and start learning!