Science has long since proven that not only do men and women think differently, but that they also process information in unique ways. While it’s never a good idea to make sweeping assumptions about any gender, it’s easy to see that women tend to excel in certain fields over men, and vice versa.

Language has long been considered an area dominated mainly by women. For example, in the field of interpretation/translation it is reported women outnumber men 3 to 1, and when it comes to language instruction, there are many more female instructors than male. So the question stands: are women better at learning languages than men? Although research into this topic is still tentative at best, take a look at what information is out there and see what you think! 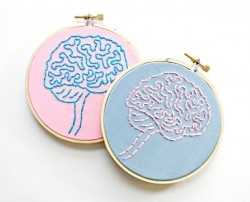 Male and female brains function differently, so it should be no surprise to you that men and women have distinct ways of processing language. Studies done on subjects studying a foreign tongue revealed that a girl’s brain will show greater activity in the part used for language encoding while the visual and auditory portions of a boy’s brain tend to be more active.

However, this doesn’t necessarily mean girls are more capable of learning a language, it just means that men and women have to approach language learning in different ways. Girls tend to be more proficient at processing abstract concepts and don’t necessarily need to combine visual and auditory learning methods to effectively cement knowledge. Men, on the other hand, tend to learn most effectively when they solidify concepts using visual cues, such as written words and illustrations, along with auditory cues through listening and repetition. Admittedly, most instructors agree that visual and auditory cues are a necessary part of language learning, whether you’re male or female, so as a language student you should apply both methods mentioned above! 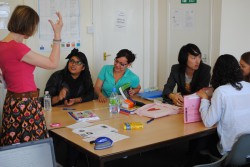 Anyone who has taken group language classes can tell you that you’ll need to get used to making a fool of yourself pretty quickly; after all, a big part of the learning journey is making mistakes, right? Interestingly enough, men and women have different approaches to making mistakes which can affect how easy it is for them to learn a language. Studies show that women tend to be natural communicators and less likely to feel embarrassed when making a blunder in a foreign tongue. Men tend to close up and speak less in order to avoid these same slip-ups.

While it is a very broad statement to say all women are sociable and all men are not (there are many exceptions out there), for those that do fall under these categories separate learning methods will work best. If you tend to be more willing to talk, whether you’re a man or a woman, group learning is probably the ideal situation for you. You’ll be able to bounce ideas off of more than one person and will enjoy chatting with a variety of individuals. For the more timid, one on one classes are the way to go. This will help you to create a space where you feel safe and less intimidated by the idea of making mistakes. 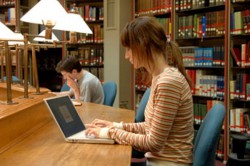 You can probably tell already that women aren’t born with the natural ability to learn languages over men, they just tend to cope with the challenges of language learning in more effective ways. The same, unfortunately, goes for student motivation. Research done in Europe, the U.S., and Canada revealed that not only were girls more motivated to study foreign languages in school, they were also more likely to continue their language studies even when it wasn’t mandatory.

The reasoning behind this remains highly disputed, but there are a couple theories out there as to why women are more likely to complete language studies than men. The first refers to the outdated method of assigning gender to certain professions. While this is changing in our modern age, there still remains a deep-seated belief in some cultures that language learning is primarily a female domain, as are professions such as teaching. As a result, most language teachers tend to be females and this leads to our second theory. This theory states that as students are more likely to have a woman as a language instructor, girls tend to connect with and look up to their teachers as role models while boys lose interest more easily.

As you can see, languages need not be a field dominated by either men or women. At the end of the day it simply comes down to mind over matter. Learning a new language is difficult for anyone, whether you’re a man or a woman, and takes a great deal of time and commitment. Luckily, picking up a new tongue doesn’t have to be a chore as long as you have access to excellent language classes and online tools such as free placement tests. Above all, don’t limit yourself based on your gender or anything else, and you’ll be surprised at what you can achieve!