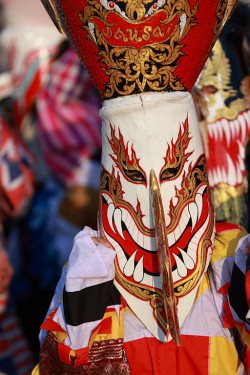 Let me set the scene for you: a few years ago, I was walking down a narrow, dusty road in a village centre, when I suddenly feel someone pinch my bottom. I spin around and am faced with a brightly-coloured demon. The demon grins and waves a large phallic weapon in my face.

At first, I am unsure whether to laugh or run as the stranger stares at me in silence, but then he advances, weapon waving and forcing me to take a step backwards. The feeling of menace intensifies and I find myself running away. Backwards; you NEVER turn your back on a demon!

Several other demons join in the pursuit and before I know it I am being chased down the road by more than a dozen demons. I suddenly trip on a stone and fall down as the group descends on me. Then, all at once the crowd begins to laugh and someone reaches out a hand to help me up. Masks are removed to reveal friendly Thai villagers beneath.

I am in the tiny, picturesque village of Dan Sai in Northeast Thailand to witness Phi Ta Khon, or the Ghost Festival. This unique celebration takes place over three days each year sometime between May and July, at an auspicious time divined by the town’s mediums, of which there are many.

During the festival of Phi Ta Khon, villagers dress in elaborate costumes made to look like ghosts and monsters. Emboldened by their disguises, the villagers embark on much mischief and merry making during the celebrations, and this is perhaps the area’s most lively and colourful event of the year.

Where does it come from?

The history of this spooky festival has strong roots in Buddhism. Legend tells that Lord Buddha’s most recent reincarnation was a royal Prince. During this reincarnation, the Prince embarked on many long journeys. Whenever he even returned, the overjoyed villagers would celebrate so loudly that they woke the dead, who would then join in the festivities.

Phi Ta Khon is a way for the spirits to be remembered and let off some steam, before being laid to rest once more for another year. The first day of the festival is known as Wan Ruam, or Assembly Day. Before dawn, the village elders and Jao Paw Guan – the head holy man – make their way to the Muan River. On the banks of the river, these men perform a sacrificial ritual to awaken Phra Ub-pa-kud, a highly revered monk who spends his time meditating beneath the flowing river waters. The water bubbles vigorously at the end of the ritual, signifying that Phra Ub-pa-kud has awakened once more.

The procession moves to Wat Ponchai in the village center, where food is offered to the many monks in attendance and worshippers say prayers as they wait for the spirits to appear.

First on the scene are the small spirits, children dressed in colourful clothing and wearing wooden masks and hats made from rice steamers and palm leaves. The small spirits prance gleefully through the crowd, posing for pictures and making mischief.

Later, when these small spirits have had their time in the spotlight, the entire village becomes possessed by demonic spirits and wreak havoc. Many of the demons carry large phallic weapons and other devices for casing chaos. The atmosphere is charged with excitement and expectation. Absolutely anything could happen at this time; all rules of behaviour have been abandoned for once.

The next two days are filled with madness, mayhem, drink and debauchery. There are demonic processions through the streets, singing, dancing and general merrymaking as ghosts and ghouls flock to the town from all over the province. Many have cowbells, known as mark-ka-lang attached to their elaborate costumes to maximize the noise levels.

Each costume is unique, cleverly crafted by the wearer. The costumes come in all shapes and sizes from large, menacing demons to cute little pixies. And then there are the mud men. These pillars of dirt stumble through the crowds, coating all they come across in mud and grime. There is no escaping these determined demons as I soon discovered. Tired of running, I surrender and allow myself to be liberally coated in mud as the mud men cheer in triumph.

One of my favourite events takes place on the second day. In between sporting events and dance contests, a procession of giant bang fai bamboo rockets are launched. The festival takes place in the hottest and driest season and it is hoped that these rockets will bring the rain.

On the third and final day of the festival, Jao Paw Guan summons his powers and drives the naughty demons back to the underworld. The ghost masks are thrown into the river and the rest of the day is filled with Buddhist sermons and merit making.

People who visit Dan Sai at any other time of the year describe the tiny village as picturesque and tranquil. Little are they aware of the demonic debauchery that bubbles just beneath the surface. Get Out of the Office: 4 Fun Places to Visit in China Read more
See more articles about Culture, Relocation, Thai, Work Abroad