Tourist Tensions in Barcelona and How to Avoid Them

Barcelona is a remarkable city in multiple senses of the term. A Mediterranean metropolis known for its sandy beaches, fairytale architecture, vibrant culinary tradition and impressive artistic heritage. It really is no wonder that millions of tourists flock here year after year to take it all in for themselves. Having spent over six months living in the city, I can confirm that the list of ways to pass your time in the Catalan capital really does stretch on: from lazing on the beach with a book after work, to spending Sundays at street food fairs or techno day parties, viewing the works of Pablo Picasso or Salvador Dalí, hiking above the city for breathtaking views, and even skiing in the Catalan Pyrenees just a short journey North. However, as with any great place, Barcelona has its shortcomings. Most significantly, it is simply too small.

Of course, size doesn’t always matter. Generally, smaller cities benefit from a stronger sense of identity, a closer-knit community and less reliance on public transport to get around. But when a city with a population of 1.7 million attracts a massive 34 million visitors each year, it is bound to reach over-capacity. Due to the rise of holiday rental giants such as Airbnb and low-cost airlines, Barcelona has become one of the world’s most visited tourist destinations. This has brought a huge amount of revenue to the country’s economy, but at a price. As property owners make up to four times the profit from holiday rentals than long-term leases to locals, the city is entering its own housing crisis.To worsen the situation, large companies frequently buy out small businesses and residential apartment blocks to develop further tourist accommodation. Crowds of holiday-makers cause high levels of congestion in the city’s centre, whilst generating anti-social levels of noise and pollution around bars and nightclubs at night. 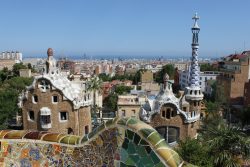 Locals fear that their vibrant, unique home city is turning into no more than a commercialised theme park. Anti-tourist tensions culminated in mass protests in 2017 against the worsening situation. Local authorities responded with a ban on the development of new hotels, hostels and holiday rentals in the city centre. Many still don’t believe that this has gone far enough, leaving the city with a complex predicament: how to benefit from the overwhelming economic advantages of tourism whilst mediating its many negative implications.

So as tourists wanting to visit Barcelona, what should we do? Well, the simple and most obvious answer is to choose to go somewhere else instead. If Barcelona is an indispensable destination on your bucket list, there are a few measures you can take to minimise the negative impact of your visit and experience the city in a much more mindful and respectful manner.

This really rather obvious point is surprisingly easy to overlook. I should know; I’ve been guilty of it. On a holiday with a large group of friends at the age of 18 whilst drinking in our Airbnb before a night out, we must have made rather a little more noise than anticipated. Before we knew it, a very angry Spanish man from the floor above stormed into the apartment, telling us to shut up and go to the beach amongst other, less publishable phrases. It seemed like an overreaction at the time, but it highlights how easy it can be, whilst in ‘holiday mode’, to forget one’s surroundings after a few sangrias. Don’t block half the pavement with your selfie-stick, be respectful of your neighbours and especially if you’ve been drinking, remain conscious of your noise levels and certainly don’t urinate in the street! 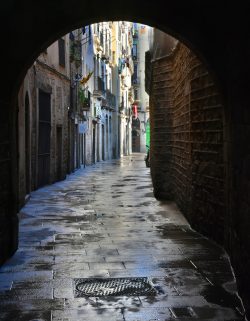 Think twice about booking to stay in an Airbnb or a large chain of hotels. Considering smaller local-run boutique hotels or rentals helps independent businesses thrive in an increasingly difficult market. If you do decide to stay in an Airbnb, check on the city council’s website whether it is legally registered— 40% of Barcelona’s tourist apartments are illegal.

Making an effort to avoid the over-crowded, tourist-focused areas of the city benefits both you as a tourist and local businesses. There is so much more to Barcelona than the tacky souvenir shops and large chain restaurants of Las Ramblas. If you get to Barceloneta and have never seen so many people on a beach in your life, head a few more metro stops down the line to Playa Llevant. Park Güell is spectacular, but Parc del Laberint d’Horta and Carretera de les Aigües are just as pretty and offer an equally breathtaking view of the city. If you want to eat real, authentic tapas, avoid the large chain restaurants with pictures and English translated menus. Why would you want to shop in Zara and Mango in the city’s centre when you could browse the independent boutiques and vintage shops of the cool little barrio of Graça?

Remember that a large percentage of the locals consider themselves Catalan, rather than Spanish. If you want to attempt to speak the lingo, opt for Catalan phrases instead of Castellano. Here’s a few phrases to get you started:

I don’t understand No ho entec

Have you been to Barcelona? What other steps would you take to avoid irresponsible tourism?

If you are thinking of heading to Barcelona, why not try a Catalan course before you go.

Comments on Tourist Tensions in Barcelona and How to Avoid Them