With Texting and Social Media Are People Really Speaking Less?

Reportedly people spend an average of about eight hours per day on their phones and computers. College students can spend anywhere between eight to ten hours on their phones per day with the main activity being texting, followed by checking e-mails and social media. It seems these days it’s more common than not to see people completely immersed in their phones in all types of social situations. If there’s a lull in conversation at an outing, the first thing people whip out are their phones. As a result, we seem to be communicating verbally less and less now that texting has taken over our lives, but is this really the case?

Blame it on the Millennials

People love to blame things on Millennials. We’re seen as entitled, lazy, demanding, and narcissistic. Don’t even get me started on the damage we’re doing to communication. Because, ever since Millennials came into the picture with their apps, social media, and reliance on the internet, they’ve ushered in a new era of communication that’s unlike anything we’ve seen before. The Millennial impact is evident; last year multiple large corporations began cutting back on voicemail options for employees. When Coca-Cola gave employees the option of retaining the ability to use voicemail when interacting with clients and colleagues, only 6% of wanted to keep it. Why? Because people just don’t pick up the phone and call anymore.

Most Millennials view calling someone as intruding in their space, but not verbally communicating with people has so much more to it than just that. Our world has sped up exponentially since the days of our parents. Today you can be updated on what’s going on around the world in real time. You have a multitude of information at your fingertips and, as a result, not enough time to take it all in. For Millennials, and those who have adopted the Millennial way of thinking, communication is all about efficiency. Often it’s more efficient to send out an e-mail or text message while carrying out multiple other tasks instead of taking the time to call someone and have to partake in small talk before getting to the crux of the matter (in that same vein, employers also state that Millennials tend to get right to the point when they communicate and don’t waste as much time making casual conversation). 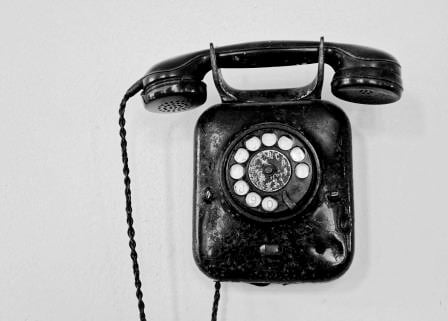 We don’t speak, we talk

The reality is that we don’t speak as much as we used to. Face-to-face interactions are becoming a thing of the past. Suddenly, the grim prophecy of a human race that never looks beyond their screens presented in the movie ‘WALL-E’ doesn’t seem so far-fetched anymore. The thing is, even though we may be speaking less, we’re actually talking more – it’s just from behind the protection of a screen. In some ways this has proved to be incredibly beneficial. These days we have the ability to communicate with people on the other side of the world, to learn about countries and cultures thousands of miles away, and form a part of online communities we’d be hard pressed to find in our near proximity – and all it takes is a few taps on a keyboard. We are able to communicate with childhood friends that, were it not for WhatsApp and social media, we would have lost touch with long ago. It also makes life easier for us expats because friends and family no longer seem so far away when you can chat with each other via text message throughout the day. In the old days you would have been able to call home once a week, but now you can talk on a daily basis!

Of course, talking and not speaking can also come with its downside. The main issue that worries most experts is that younger generations which rely more and more on non-verbal communication will fail to develop the skills to interpret verbal cues. A lot can get lost in translation when you’re sending a text message as opposed to when you talk to someone face to face. It can be difficult at times to interpret the tone of a text, leaving you confused as to whether the sender is angry or sad. With verbal communication, on the other hand, it’s easier to pick up on the intent and emotion behind a conversation. Or at least it is for the generations that grew up still having face-to-face conversations. For the rest, the fear of not being able to adequately carry out a real conversation is daunting. Perhaps we’ll have a generation of conversation-phobic people next.

Comments on With Texting and Social Media Are People Really Speaking Less?