The title was ironic, could you tell? Of course not. In today’s world of text-based communications, I have been burned time and again by the limitations of commonly used punctuation, and at times I find it difficult to politely convey my less-than-sincere intentions. Since sarcasm and, at times, irony generally rely on the tone of the speaker’s voice to indicate the quip, a person being razzed over social media may not feel properly insulted until long after the comment was made.

Many attempts have been made in recent years to specify that a sentence should be understood on another level, such as adding in the physical indicators of sarcasm (e.g., “Sure, you’re absolutely right. *rolls eyes*”). But whether you prefer to use the Twitter-style hashtag #sarcasm or the HTLM inspired </sarcasm>, the fact remains that there is currently no standard way to denote neither irony nor sarcasm.

Enter the percontation point. Styled to look like a backwards question mark, this little baby has many uses. Proposed by an English printer, Henry Dunham, in the 16th century, the rhetorical question mark, or percontationpont, begged the question, “Could this punctuation be any more awesome.” 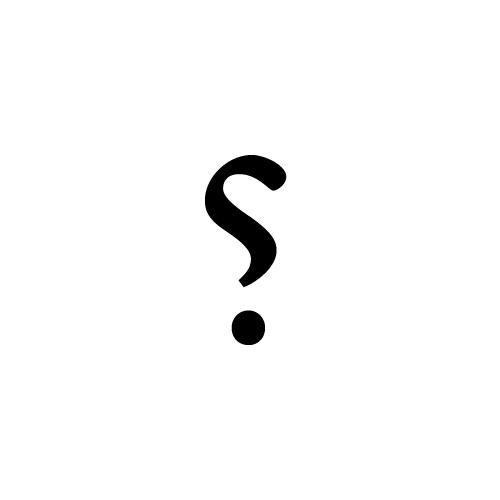 The idea soon fell out of favor, later resurfacing in the 19th century as the irony mark. This new form of the percontation point (slightly elevated and off center) was used before a sentence to indicate its deeper ironic meaning.

In more recent usage, the irony mark (a.k.a., “snark” or “snark mark”) is at times represented as a period followed by a tilde (.̴), and is used at the conclusion of a statement to emphasize its mocking, distinctly sarcastic, tone. Finally, a wry punctuation mark to go up against all those peppy exclamation points. Those looking for typographic characters to bridge this particular emotional gap in the English language would however do well to use it wisely. As a great man—a spider man, if I am not mistaken—once said, “With great power comes great responsibility.” And to those few of you who don’t think people make sarcastic remarks directed at you: I’m sure you’re probably right.̴

What punctuation do you most like using in social media?