How I Became Fluent in Spanish by Using Tinder

In my junior year of college, I spent a semester taking classes in Buenos Aires, Argentina. But like most American college students participating in study abroad programs, studying was one of the last things on my mind. I wanted to go out into the world, explore a new city, and immerse myself in a new culture (which is ostensibly the real point of study abroad programs, anyway).

Getting to know Buenos Aires with my American classmates was a blast at first, but when staying out every night until seven in the morning began to lose its appeal, I realized I wasn’t fully taking advantage of my study abroad experience in the way that I had envisioned. Yes, while hanging out with my friends was fun, what I really wanted to do was leave my comfort zone and spend some quality time with the locals.

So how’d I do this? Easy. I downloaded Tinder.

Now, if you’ve managed to lead such an innocent life that you still don’t know what Tinder is, I wholeheartedly commend you. Allow me to enlighten you.

Tinder’s website proudly proclaims that “Tinder is how people meet.” This is kind of true, but doesn’t really tell the whole story, so I’ll let you fill in the blanks. To make a profile on Tinder, you have to upload some pictures of yourself, write a bare-bones biography (less than 500 characters), and specify if you’re attracted to men, women, or both.

Once you’ve set up your profile, Tinder shows you potential “matches” who are nearby. Then, you swipe right if you think the person is cute and/or witty, and you swipe left if you don’t. When you and another lucky Tinder user both swipe right, the app excitedly declares that “It’s a Match!”, and allows you to chat with each other.

If, after reading this, you’ve come to the conclusion that Tinder is a sleazy dating app:

Does it seem to attract shady individuals? Certainly.

Does it suck the romance and magic out of dating? Oh, yeah.

To a young American studying abroad, can it serve as an incredibly valuable language learning aid?

Here’s just some of the ways that Tinder helped me master Spanish—way more than any class could—while I was studying abroad in Argentina.

It forced me to have entire conversations in Spanish

This was probably the way in which Tinder was most crucial to my Spanish education: I had to spend prolonged periods of time speaking entirely in Spanish—and not the half-assed Spanglish that you use when you’re with your American friends. Indeed, when you’re with your friends from home, it’s easy to slip into English, no matter how hard you try. But when you’re on a date with a native Spanish speaker, you no longer have this English-language safety net.

Incidentally, this is another advantage that Tinder has over language exchange apps. While language exchanges require that you spend half your time speaking in your native language, Tinder dates impose no such requirements, which allowed me to really maximize my Spanish in the short time I had abroad.

The concept of adjectives having gender was really drilled into me

In Spanish, inanimate objects have gender, so la mesa (“the table”) is female, whereas el piso (“the floor”) is male. Importantly, adjectives have to agree with the gender of the noun they modify. So if you’re talking about a red table (la mesa roja), you have to use the feminine form of red (“roja”) and not the masculine one (“rojo”). 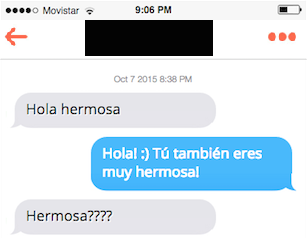 I learned about using the subjunctive to express desire or doubt 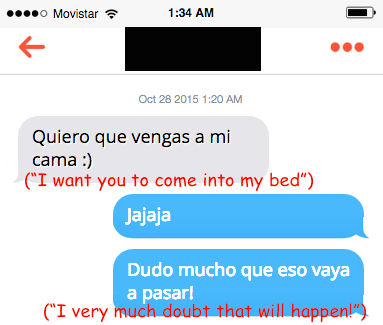 The subjunctive mood is notoriously difficult to master for learners. It involves the use of slightly different verb endings in certain situations, such as when expressing desire or doubt.

Hold up—did somebody say “desire”? As you might imagine, Tinder gave me a plethora of real-life examples of people expressing their desires to me. And in turn, I learned how to use the subjunctive to keep these desires in check. Refer to the below image, in which a short-lived match and I both exhibit perfect use of the subjunctive.

I got a taste of regional slang 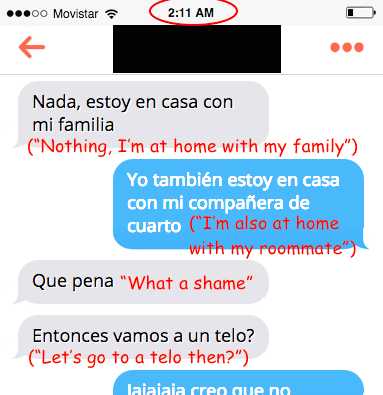 I was doing pretty well in the above conversation until I encountered the word “telo.” So I looked it up, only to discover that it’s just a modified version of the word “hotel,” with the syllables flipped around. But as I learned, the connotation is quite different: a “telo” is a hotel that’s rented by the hour, typically by people whose living circumstances don’t allow them to freely and intimately express themselves (like my friend pictured above).

In this way, Tinder taught me not only what a “telo” means, but also that telos even exist in the first place! Given that Argentines often live with their families for longer than is typical in the United States, telos can be an occasional necessity when you don’t want your parents to be too involved in your love life. Linguistic and cultural knowledge: dos pájaros de un tiro (“two birds with one stone”). 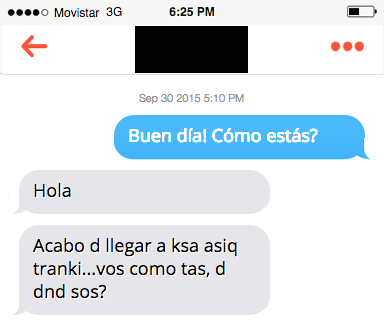 The sterile, robotic dialogues that often appear in language course books won’t do much good in the real world, especially when you’re faced with seemingly indecipherable strings of characters like the one above. Tinder forced me to do some serious detective work, learning the ins and outs of casual Spanish orthography. To understand the above message, I needed to learn the following:

Ultimately, I figured out that he had just gotten home and was chilling out, and wanted to know both how I was doing and where I was from. By the end of the semester, you bet that I was as adept at chatspeak in Spanish as u r in English.

…And now I know every pick-up line in the book 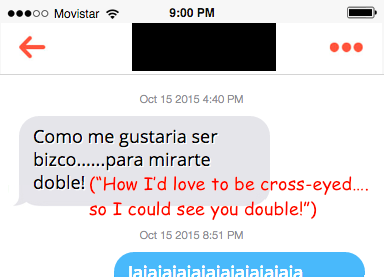 Now here’s something that I definitely wouldn’t have learned in Spanish class. I feel as though I’m now a vast encyclopedia of Spanish-language piropos (“pick-up lines”), so if anyone’s interesting in laying some moves in Spanish, just let me know and I can help you. Indeed, the (fairly tame) one pictured above doesn’t even scratch the surface. Sure, pick-up lines might not be the most crucial part of a language, but they can sure get a laugh out of my Argentine friends when I say them.

I don’t want to give the impression that my experience on Tinder was all piropos and random telo encounters. Though I didn’t meet my one true love, many of my Tinder dates blossomed into real friendships with people I still talk to (in Spanish, of course)—and some even ended in romantic evenings walking along the cobblestone streets of Buenos Aires’ quaint San Telmo neighborhood.

But in all my experiences, from the creepiest to the sweetest, and everything in between, I always learned something new. Tinder gave me the unique chance to break away from my English-language comfort zone, and really forced me to immerse myself in the language and the culture, in a way that is sometimes hard to do on university-sponsored study abroad trips. It might not be right for everyone, but I can say without a doubt that it was the most useful tool I’ve ever encountered for improving my Spanish.