Improve Your British Accent With These British TV Shows

When people think about British accents, their mind often goes to Jane Austen film adaptations, Netflix’s The Crown, or the Masterpiece series on BBC. This type of accent, known as Received Pronunciation or Standard English, is only one of the many varieties of English that you will find if you happen to travel to the UK.

In this article, we will present you with an overview of different TV shows where different English accents can be spotted, as well as useful tips to tell them apart.

It would be impossible to talk about British TV culture without mentioning EastEnders. Created in 1985 by BBC One, this soap opera has been one of the most-watched programmes in the United Kingdom for more than three decades. The series, which was created by Julia Smith and Tony Holland, follows the domestic and professional lives of common people living in a fictional city called Walford, in East London.

The peculiar accent that you can hear in this clip is known as ‘Cockney’ a dialectical variety of English that is mainly spoken by the working-class and lower-middle-class in London and its surroundings, particularly the East End.

The main features of the Cockney accent are:

2.  Last of the Summer Wine (Yorkshire)

If you thought Dynasty was a long show, you probably never heard about Summer Wine.  This series, which aired from Wednesday 4th January 1973 to Sunday 29th August 2010 without interruption, is the longest-running television sitcom in the history of television.

Created by Roy Clarke, this beloved series set in West Yorkshire revolves around a trio of old men and all their (mis)adventures as they try to stay young by attempting feats not common (or safe!) for the elderly.

Summer Wine provides a rare opportunity to hear the Yorkshire accent while having loads of fun. Though it varies greatly depending on the area where every speaker was raised and even how old they are, there are a few characteristics that are common to all sub-dialects:

In Yorkshire, the ‘a’ sound is significantly shorter in words like ‘chance’, last’, and ‘laugh’. In addition, the position of the jaw would be higher than it is in other varieties.

Speakers with a Yorkshire accent produce a long ‘o’ sound instead of a diphthong in words like ‘spoke’ or ‘lone’, resulting in /spo:k/ and /lo:n/.

Based on the saga of novels by Diana Gabaldon, Outlander is a series that mixes fantasy, history and romance against the backdrop of 18th century Scotland. During World War II, Claire, a married nurse, has a surprising experience. During a trip to Scotland, she comes across a mysterious circle of ancient stones and enters a trance to wake up far from her husband, her time, and the life she has known so far.

Led to the Scotland of 1734, Claire will be immersed in a country populated by different clans, superstitions, and violence.

Next to The Haunting of Bly Manor, Outlander is one of the most-watched TV series on Netflix. But this show it’s not just an exciting watch. It’s also a wonderful opportunity to familiarise yourself with Scottish English.

Though this variety presents can also be distinguished from Standard English on a grammatical and lexical basis, today we are going to focus on its sounds:

In Scottish English, there is no difference in length between the vowel in “fool” and the one in “full”. Pairs of words like pool/pull, look/Luke are pronounced exactly the same in most parts of Scotland.

In Standard English, we have a short vowel sound for “hot”, and a long one for “thought.” In Scottish English, both words have the same pronunciation. In the phrase “It was hot and I thought a lot about the law”, for example, all ‘o’ sounds are equally short.

Unlike Standard English, Scottish English is characterised by its strong ‘R’ sound, even when the letter R occurs before consonants or at the end of words. In the phrase “the murder of the bird surprised the girl”, you would be able to hear the trill of every R if said by a Scottish speaker.

As you can see, British television offers a myriad of English accents. If you’re travelling to a specific region of the UK or thinking about getting UK citizenship, the best thing you can do is look for TV series that reflect the accent of your target area so that you can get enough exposure to that particular variety before your trip.

Of course, if you want to sound like a local, you’ll need more than binge-watching. By taking a one-to-one course with one of our native teachers, you’ll get to do lots of speaking, and you will receive personalised feedback so that you can improve your accent in every class. 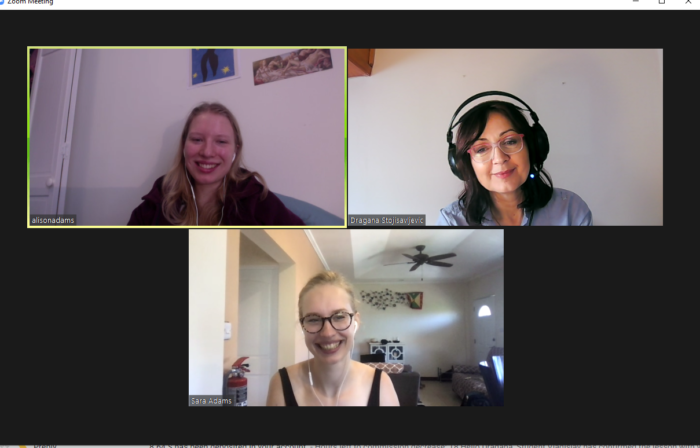 This is exactly what attracted Ilona, one of our clients, to our in-person courses. Ilona, who has been taking lessons with one of our native tutors in the city of Milton Keynes, 50 miles north-west of London, has got in touch with us tell us how much she enjoys her lessons:

“My English classes are going amazing. They are dynamic, comprehensive, and never boring. (We even play games!) I learn something new in every class, which is exactly what I wanted.”

If you want to take an online lesson for free before you commit to a lesson pack, send us a quick message now and we’ll match you with a native teacher of English for a completely personalised trial class.