Have clients or colleagues overseas? Thinking of working abroad? Learning a new language opens up new professional opportunities. In fact, in a survey by the National Foreign Language Centre of 2,100 HR departments, a whopping 93% of employers admitted to favouring those who speak another language.  Enrol in Chinese classes before embarking on your next adventure. You will broaden your awareness of the similarities and differences between cultures while sharpening your appreciation for the nuances of your own native language. Become more proficient communicating using a new language, as well as your own! There are opportunities abound for those who know Chinese. Knowing a second language can open up new personal and professional paths and broaden your cultural horizons! Get started with learning Chinese! 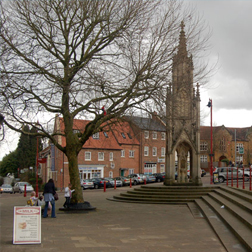 Sign up for our Chinese lessons in Daventry today! Schedule your lessons whenever you want them, so you can always find time to study, regardless of your timetable or location. You don’t even have to leave home to meet your teacher!

1-on-1 General Chinese Course in Daventry

Our general one-on-one courses in Daventry will help students improve their Chinese level quickly and efficiently, whatever their needs. One of the most exciting aspects of our courses is that they are developed entirely around the needs of the students. The fact that we offer our Chinese classes on a One-on-One basis means that you can learn the words and phrases you need in a comfortable and relaxed environment.

1-on-1 Business Chinese Course in Daventry

Our Chinese courses in Daventry are taught on a one-on-one basis and will help you improve your business communication skills immensely. No matter what level you begin at we will soon have you dealing with business introductions comfortably before moving onto other matters. Beginner level students can expect to finish the course with basic telephone Chinese and email skills, as well as a level of survival Chinese, granting them the ability to work in a country where Chinese is the native tongue.

7279
people have taken our
Chinese level test.
9
language teachers in Daventry
are already registered with Language Trainers.
Start Learning
“”Everything is going great with the lessons. The teacher is really good and understanding.””
Neil Woodcock
Chinese course in Hull
“”The lessons are going really well and we are acquiring the specific vocabulary needed for our job roles each week too.””
Faye Cook
French course in Liverpool, Logistics & Administration Officer, Plexus Cotton