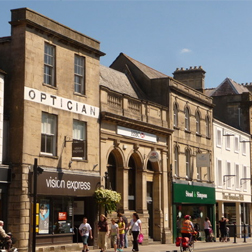 Take advantage of opportunities in both Warminster and abroad. Make the most out of your trips and connect with the local community on a deeper level! One of the best ways to show respect to someone and build rapport with them is to attempt to speak their language.  Whether you want to learn a foreign language for professional or personal reasons, Language Trainers has the tutor and tools to help you accomplish your goal. Studying a language can be a long-term task, but the results are long-lasting, plentiful and worthwhile.  Meet a native, qualified tutor in Warminster and receive a personalised course package based on your learning goals. We will adapt to your busy schedule: whether you want to learn a language in the morning, afternoon or evening, just get in touch with us and we will be there! Are you ready to get started? Take a free online language level test now and see where you stand! The test only has 70 questions and you will get your results on your screen and via email as soon as you finish.  So, send us a quick enquiry to meet a tutor in Warminster! We will go beyond the basics and take your language journey to the next level in no time.

Sign up for our Greek lessons in Warminster today! Schedule your lessons whenever you want them, so you can always find time to study, regardless of your timetable or location. You don’t even have to leave home to meet your teacher!

1-on-1 General Greek Course in Warminster

Our general one-on-one courses in Warminster will help students improve their Greek level quickly and efficiently, whatever their needs. One of the most exciting aspects of our courses is that they are developed entirely around the needs of the students. The fact that we offer our Greek classes on a One-on-One basis means that you can learn the words and phrases you need in a comfortable and relaxed environment.

1-on-1 Business Greek Course in Warminster

Our Greek courses in Warminster are taught on a one-on-one basis and will help you improve your business communication skills immensely. No matter what level you begin at we will soon have you dealing with business introductions comfortably before moving onto other matters. Beginner level students can expect to finish the course with basic telephone Greek and email skills, as well as a level of survival Greek, granting them the ability to work in a country where Greek is the native tongue.

3464
people have taken our
Greek level test.
5
language teachers in Warminster
are already registered with Language Trainers.
Start Learning
“”The first lesson was really good and I’m very much looking forward to the rest of my lessons and time with Penny.””
Neil Hendriksen
Greek course in Southampton
“”The Greek lessons are going well and the children are becoming more confident in what they are learning. Also, they are having fun learning which is a bonus.””
Louise Holmes
Greek course in Leicester