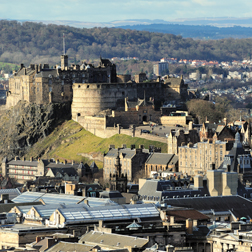 Edinburgh is a multicultural city with an estimated population of almost 500,000 people according to the 2011 Census, and 5,000 of them are Spanish speakers. Learning Spanish, then, will integrate you into this multicultural community, as you will be able to communicate with Spanish speakers on another level. Moreover, if you are looking for a new job, Spanish proficiency will also make you stand out in comparison with other monolingual candidates, and even let you get a whole lot more out of your trip to Spain or Latin America! At Language Trainers, we specialise in designing personalised courses that adapt to your skills and requirements, no matter how busy your schedule is.

Sign up for our online lessons today in Edinburgh! Schedule your lessons whenever you want them, so you can always find time to study, regardless of your timetable or location. You don’t even have to leave home to meet your teacher!

Why Study Spanish in Edinburgh

Learn Spanish for Work: Today, business relations with Hispanic countries play a vital role in the British economy, and especially in Edinburgh, the city with the strongest economy of any city in the UK outside of London. An impressive 43% of its population hold a degree-level or professional qualification. Competition in Edinburgh is fierce, which is why learning a language such as Spanish is essential for giving you the edge over other candidates. Taking Spanish courses in Edinburgh will enhance your marketability greatly among employers, taking your career to an international stage. For example, some companies that are always looking for bilingual speakers are Amazon, Sykes and Mindbench to fill positions such as Customer Service Representative, Project Manager and Travel Account Developer.

Learn Spanish for Travel: The benefits of taking a Spanish course are not limited to work and business. Spanish is the official language of 20 different countries, so the ability to speak it will make your travels abroad much more exciting. Spain is one of the favourite holiday destinations for Scotland’s citizens, with passenger numbers for tourist hotspots like Madrid and Malaga rising every year. In 2019, some of the busiest routes to and from Edinburgh came from Spain, as Iberia started flying directly to and from Malaga, Tenerife, Barcelona, Alicante and Madrid. In just a few hours you will be in the sunny beaches of Alicante, communicating with locals and using the skills you learn with Language Trainers. So, learning Spanish will not only enhance your career but will also grant you much more freedom on your holidays to explore the country in depth.

Learn Spanish for Culture and Social: Those more interested in understanding the Hispanic culture will be happy to know that this community in Edinburgh is also large and vibrant. Organisations such as the Hispanic Arts Scotland, for example, promote Spanish arts and gather large Edinburgh flamenco flash mobs all over the city. And if you are more into cinema, the University of Edinburgh has been organising its own Edinburgh Spanish Film Festival since 2010, bringing together both the local and Hispanic community through the arts. Taking Spanish classes in Edinburgh brings you closer to this exotic and lively culture whilst remaining in the heart of Scotland! Learning Spanish is also useful to connect with the local community that speaks the language. You can make new friends by joining the Edinburgh Spanish/English Language Exchange, which started in 1999. Its more than 7,000 members get together to improve their Spanish in an informal setting. Don’t be shy, there is no minimum level required!

Where to Learn Spanish in and around Edinburgh

As the second-most-spoken native language in the world, Spanish is essential for communication on a global level. At Language Trainers we are fully aware of the potential of learning Spanish, and this is why we offer language courses completely tailored to your skills and needs. Just contact us and one of our highly qualified, native-speaker teachers will come to your home or office. You can also meet at a public place in downtown Edinburgh, such as the Central Library on George IV Bridge, Levels Cafe and Lounge on Holyrood Rd or Lowdon Coffee on George St.

And if you live nearby Edinburgh, you can still learn Spanish with us. We have amazing teachers waiting to start in in Dundee, Glasgow, Dunfermline and Aberdeen.

Sign up to Spanish lessons in Edinburgh today. Let’s go, vamos! Take our free online Spanish level test to see where you stand, and then send us a quick enquiry to get started right away!

Send us an enquiry and enjoy a trial lesson today!
Interesting Language Facts

One out of every four people has at least some knowledge of the English language.
WHY people learn SPANISH?
1.
Travel to Spanish-speaking countries
2.
Business abroad
3.
Communication with in-laws/family
SPANISH

Is it a tailor-made course designed to learn Spanish faster and achieve your goal?

1-on-1 General Spanish Course in Edinburgh

Our general one-on-one courses in Edinburgh will help students improve their Spanish level quickly and efficiently, whatever their needs. One of the most exciting aspects of our courses is that they are developed entirely around the needs of the students. The fact that we offer our Spanish classes on a One-on-One basis means that you can learn the words and phrases you need in a comfortable and relaxed environment.

1-on-1 Business Spanish Course in Edinburgh

Our Spanish courses in Edinburgh are taught on a one-on-one basis and will help you improve your business communication skills immensely. No matter what level you begin at we will soon have you dealing with business introductions comfortably before moving onto other matters. Beginner level students can expect to finish the course with basic telephone Spanish and email skills, as well as a level of survival Spanish, granting them the ability to work in a country where Spanish is the native tongue.

Switch between face-to-face and online Spanish classes with a hybrid course!

Some of our Language Teachers in Edinburgh

Irina is a highly qualified Russian teacher who boasts an impressive 18 years of teaching experience to students of all ages and backgrounds. As a language teacher and translator, her clients include the Council of Europe, the Scotland-Russia Forum, Amnesty International, and the Human Rights Foundation.

Wouldn't you love to learn Spanish before your trip this summer?
We can help.

Let us know why you need to learn Spanish and include the time and location that best suit you.

Receive confirmation from our team with your Spanish tutor’s details.

Throughout your Spanish course, the Language Trainers Academic Team will be on hand to help you with any queries.
Click to find out more.
After the first lesson or two, our team will contact you to ensure you are happy with your trainer. If necessary, we will change the focus of the course to better suit your needs.
After finishing your course, we will send you a course attendance and completion certificate..
Our team will provide you with follow-up learning opportunities, including: self study material, language courses in Spanish-speaking countries, and more advanced courses with Language Trainers.
*Deposit payable by check, credit card, wire transfer, or PayPal. Your quote will include the number of classes and cost. A typical course lasts 30 hours per level, with classes of 2 hours each.

”The Spanish lessons are going great. I really appreciate the flexibility, since it suits my work patterns and gives me the chance to revise before each lesson.”

”My teacher, Ada is great. She understands my learning needs and works the classes accordingly.”