Anybody remember when George H. W. Bush tried to signal “peace” during a visit to Australia in the 90s by giving a large crowd the time-honoured two-fingered salute? Though he didn’t know it at the time, he was actually telling the whole crowd to go screw themselves – and all because he made the seemingly innocuous error that his palm was facing inwards instead of outwards.

Nacho highlighted the danger of using certain hand gestures when travelling in an earlier post, as some have very different meanings in some countries from what we as Westerners believe them to stand for. Let’s take a look, shall we?

This one actually has a universal meaning; it was just too good not to include in any compilation of hand gestures. There aren’t many places on earth where you could get away with frantically fist-pumping at somebody – I’d imagine because masturbating’s the same wherever you go. Even in Japan. 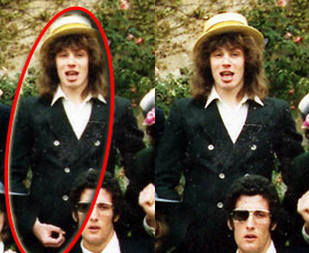 Interestingly, in Greece and Portugal the gesture is made with the palm facing the ground, implying that the person is rather fonder of wanking other men as opposed to himself. Tony Blair, caught in the act. Or, thanks to some Photshopping, maybe not. And yes, Tony… you are.

First of all, let’s quash the urban legend of the “thumbs-up/thumbs-down” being used by the audience in the Roman coliseum to vote on the life or death of a defeated gladiator, as furthered by such movies as Gladiator and Spartacus. There’s no evidence for this, and it’s just massively unlikely. Sorry. 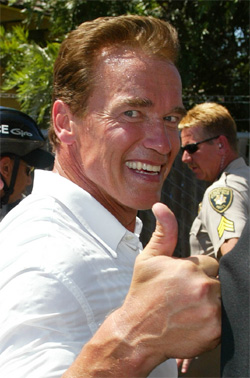 While Western culture has become used to the thumbs-up as a positive, informal signal, generally indicating a job well done (probably stemming from World War II pilots using the signal to communicate that they were “good to go” with ground crews), there are cultures where a thumbs-up may land you in trouble. In most of Latin America and West Africa, as well as Greece, Russia, Sardinia and the south of Italy, the thumbs-up basically means the same as the middle finger: “sit on it and swivel”. Also, it’s generally not recommended to use the thumbs-up around the Middle East as it’s pretty much the biggest insult out there – and even worse if you pull off the emphatic version with both hands – so no Fonzie impressions, please.

Rather more charming is a thumbs-up in Germany and in the less-Westernised areas of Japan – they just see it as the hand signal for the number one. Bless.

Opening your palm to your target and stretching out your fingers seems harmless enough to most Westerners. Most of us would think you’re waving. In Greece, however, the gesture is known as a moutza, and is one of their most traditional manual insults. With fingers slightly apart, you thrust your hand into your target’s face, usually coupling the gesture with a brash “na!,” meaning “here you go!” The basic suggestion is something like “eat shit”, implying that you’re not particularly impressed and would rather the target of the moutza leave you alone – comparable to the American interpretation of the same signal as “talk to the hand, because the face isn’t listening”. 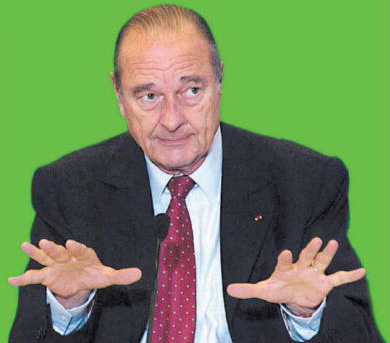 The gesture is also an insulting one in Pakistan and many parts of Africa. The Japanese use a very similar sign to insult their old enemies, the Koreans. Roughly translating as “animal,” the signal is similar to the moutza in every way except they tuck the thumb into the palm.

Amusingly, Microsoft used to use a very similar-looking hand signal as an icon for warning dialogs in previous versions of Windows – what Greek users must have thought of that, I don’t know. “This application has performed an illegal operation – now, eat shit!”.

Curling your index finger towards you in a summoning motion is a gesture generally linked with seductive temptresses in Hollywood movies, beckoning for their targeted men to follow them into another room. 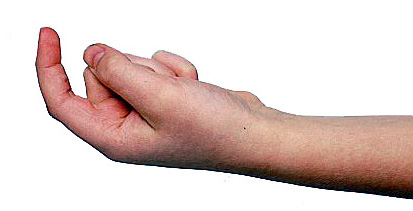 Beware, however, of using this gesture in the Philippines – it’s a method of communication considered worthy only to use on dogs, and is actually punishable by arrest. Worst of all, they’ll break your index finger in order to prevent you from committing the same crime again!

Interested in Italian? Check out our Italian Courses in London.

Mainly used by scuba divers to mean “OK” (to prevent ambiguity with the thumbs-up sign, which means “ascend”), this hand gesture is generally called ‘A-OK’, and in America and the UK is often used to tell somebody that they’ve made a great meal, as talking with your mouth would just be impolite. Essentially the meaning comes out as “great”, or “absolutely fine”. 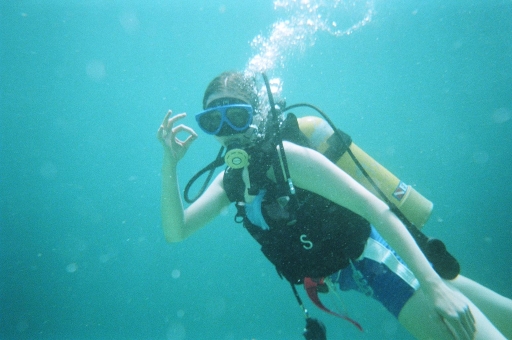 Not so, however, in a few countries in Europe, where the numerical interpretation gives the signal an insulting overtone – essentially you’re telling them that you think they’re a “zero.”

Far worse, however, is the meaning in Brazil, Germany and a few Mediterranean countries: the circular shape of the gesture gives it the meaning of “anus,” and is therefore used to call somebody an “asshole”, or, by extension, a homosexual. You probably wouldn’t learn that in most of your traditional German courses.

While there isn’t really an equivalent in Western culture, the cutis in Indian and Pakistani culture is basically a thumbs-up, except you push the nail on your thumb against your front teeth and flick, while saying “cutta!” It basically amounts to “screw you,” and famously appeared in the media when Pakistani fast bowler Shoaib Akhtar made the gesture in Melbourne as he left the field for a rain delay during the 2004 test series against Australia. 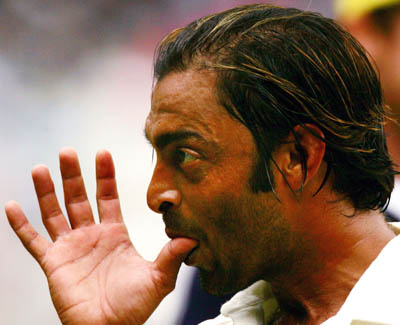 Need English classes? Learn English in Dublin with us.

The age-old ” V sign” comes in two formats: one with the palm faced outwards, and one with the palm inwards. In the United States, the two hand signals mean the same thing – “victory,” as popularised by Richard Nixon, or “peace and love,” which seemed to become the primary meaning after anti-Vietnam protesters used it during the 60s. 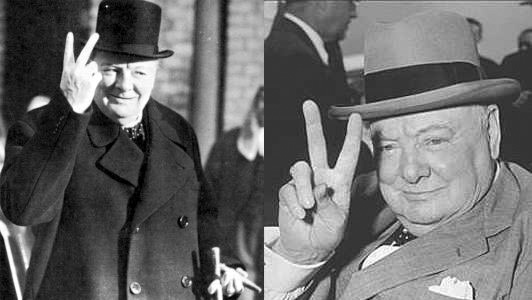 However, if the outside of your hand is facing your target, you’re giving somebody a long-established insult in Great Britain and many English-speaking countries such as Australia, Ireland and New Zealand. Winston Churchill famously used the incorrect version of the V sign during the early years of the war, switching round later when he’d been told by his advisers that he wasn’t exactly giving the lower social orders a positive message. The V sign is also considered rude in Italy, especially if you place your nose between the two fingers, making the gesture resemble a crude vagina.

I, myself, have almost seen a fight start as a result of a US tourist ordering drinks in an English pub: when asked how many pints he wanted, he simply stuck two fingers up and looked straight into the eyes of the barman – perfectly normal on the other side of the Atlantic (it’s actually the signal for the number 2 in American Sign Language), but it’s fighting talk to the British. Nothing more than a fist with the thumb poking out from between the index and middle fingers, the mano fico (literally “fig hand”) is a gesture of Roman origin, used as a positive gesture to encourage good luck and fertility, and ward away the ‘evil eye’. The sexual nuance comes from from the hand’s resemblance to the female private parts (fica is actually Italian slang for “vulva”), with the nub of the thumb representing the clitoris.

There seems to be a lack of positive meaning to this sign these days, however. If you’re doing the “fig,” it probably means you’re denoting a letter T in American Sign Language. But if somebody else is giving you the same gesture (especially if they are of the Asian persuasion), they’re probably giving you a rather disparaging insult, roughly equivalent to “fuck you!”. This hand sign is also highly disparaging to Italians and Turks, and in India would be taken as a threatening gesture. Most non-deaf Americans or Brits, however, would simply see the mano fico as a bizarre-looking fist.

Searching for English classes? Learn English in Edinburgh with one of our teachers.

Consisting of a clenched fist with the second and fifth fingers straightened out, the corna (horns) hand gesture has most recently been adopted by fans of rock and heavy metal music, first used by Black Sabbath vocalist Ronnie James Dio. The gesture carries only a vague meaning, implying the presence of Satan, malevolence and loud guitar music, and is used in much the same way as headbanging. The gesture was actually popularised as a Satanic salute during the 1960s, appearing in many editions of the Satanic Bible. Nowadays many Americans use the gesture simply to mean rock on, or in support of the University of Texas in Austin (known as the Hook ’em Horns). 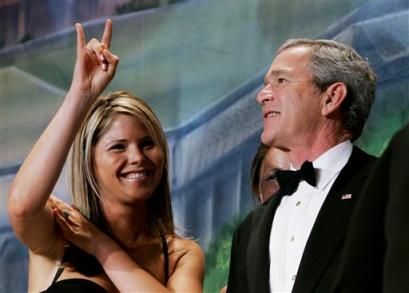 Occasionally used by baseball players to indicate “two outs,” the corna is actually a positive hand gesture in Buddhism and Hinduism, known as the Karana Mudra in such circles, and is used to dispel evil – an interestingly opposite meaning to its contemporary significance.

Of course, if you’re thinking of learning that in a Spanish course London is probably the best place to start.

Most likely derived from Ancient Greece, the finger is one of the most widespread obscene gestures throughout the Western world. In a handful of Mediterranean and Arab countries the index finger is preferred to the middle, but the meaning remains crystal clear. There are a myriad of different stories for the origin of the finger (going back as far as 2500 years), making mention of Greek tragedies, phallic representation, perverse Roman emperors, English longbowmen, and annoyed deaf people – but we just don’t know. 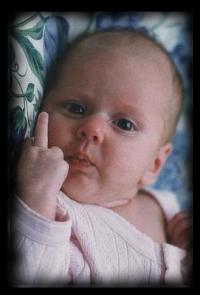 Also known as the flip-off, the bird, the highway salute, digitus impudicus, and the One-Fingered Victory Salute (thanks to President Bush’s famous TV blooper), the middle finger is probably the most universally-understood hand gesture in the world. This is owed mostly to its age, the sheer simplicity of the gesture, as well as the human preoccupation with somehow relating everything back to sexual organs.

Of course there are regional differences, from half-extending the second and fourth fingers (no doubt to represent the balls on either side of the middle finger), or combining the finger with another rude gesture, to being as creative as holding up your middle three fingers and telling your target to read between the lines.

So, there you have it – ten of the most popular (and most globally misunderstood) hand gestures, in all their glory. I’ll end this post by offering the same advice Nacho did in his post – the best idea when travelling abroad is probably to keep both hands pinned to your sides.

Do you think they should cover British slang and our most popular hand gestures as part of the English courses London has to offer?